01  Are Dalmatians born with spots? 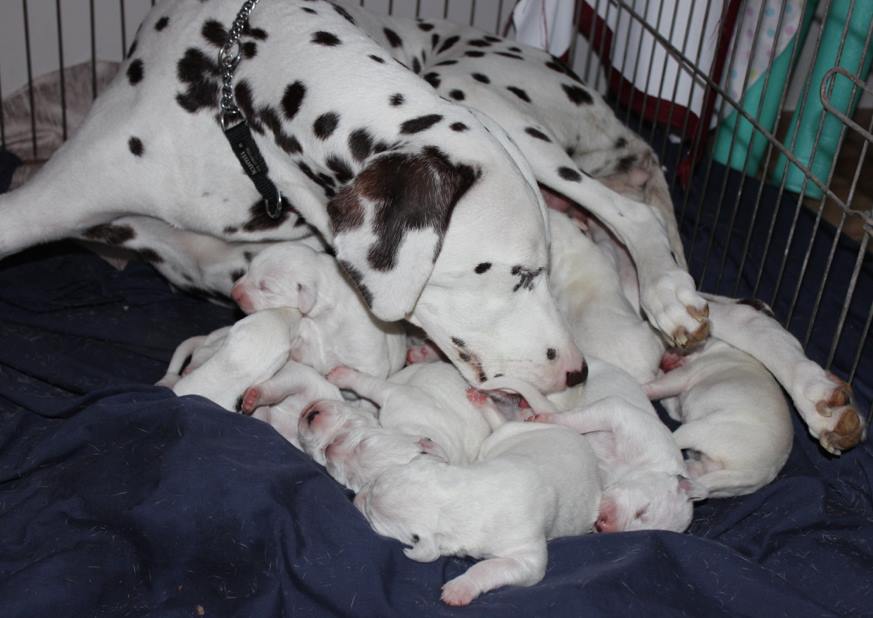 No, Dalmatians are born with pure white fur, but their spotting patterns can be seen on their skin underlying their coat. The spots start developing at approximately two weeks of age. Many puppies are also born with pink noses and eye rims that may also fill in with colour as they mature. Dalmatians can also differ significantly in their spotting pattern, ranging from light to heavily spotted. They are also mostly found in two main colours: black and liver spotted, though sometimes you might come across a lemon-spotted Dalmatian. or a tricolour (black and liver spots together).

Some Dalmatians are born with what is known as "patches", which are larger pigmented areas than the usual well-defined, circular spots. Patches are predominately found over eyes and ears. Dalmatians with patches are generally regarded as pet only, as they do not qualify for showing, nor used in breeding programs.

Interesting factoid: As the only spotted dog breed, any other breed with spots would likely have been interbred with a Dalmatain at some point.


02  Can you feed Dalmatians cooked bones?
No, never feed cooked bones to any dog, as these can splinter and cause internal damage or become an intestinal obstruction. Raw bones are safe, but always check with your breeder first.


03  Are all Dalmatians stone formers?
Not all Dalmatians are urate or cystine stone formers, but it is better to be safe than sorry. That is why DRAWA recommend feeding your Dalmatian Low Purine foods, such as those listed in the Purine Chart from the British Dalmatian Club here.  Foods such as offal and sardines are particularly high in purines and should be avoided in all Dalmatians, even those that aren't stone formers. Most good quality pet food manufacturers, e.g Royal Canin, Hills, Black Hawk, will have low-purine or breed specific fomulations.


04  Should I do research before Buying or Adopting a Dalmatian?
As with any animal, husband, wife or children, it’s better to know what you are letting yourself in for! Dalmatians are generally of good demeanour and will make a great companion. They are a large breed and do require training and regular, daily exercise. So, yes, definitely do your research on whether a Dalmatian is a good addition for your family. For more infomation on Dalmatians, head over to our contacts page.


05  Are Dalmatians hard to train?
Well most seem to train their humans quite well, it’s amazing really. But in all seriousness, no they are not hard to train. More specific information on training Dalmatians can be found here.

They were trained to run alongside the carriages, defending the horses from other dogs or animals that would spook or attack the horses during the ride. They also protected the carriage and it’s passengers from highway men.

In the U.S they started being used in Firehouses, when a fire alarm sounded, the Dalmatians would run out of the firehouse, barking to let bystanders know that they should get out of the way because the fire fighters wagon would soon come roaring by. Once the wagon was out on the street, the Dalmatians would run beside it. The brave, loyal dogs also served an important purpose once the wagon approached a fire. Horses are afraid of fire, and the Dalmatians’ presence could distract and comfort the horses as they pulled the wagon closer to a blaze. The Dalmatians also stood guard near the wagon to ensure that no one stole the fire fighter’s belongings, equipment or horses.

In more recent times the U.S. Army used Dalmatians to guard military camps during World War I, World War II, and the Vietnam War. Dalmatians are very protective, this makes them good watch dogs. The British army used Dalmatians to carry messages during World War II. An army officer would tie a message to the dog’s collar. Then the officer would give the dog a command to travel to another camp. Dalmatians were good at this job, but there was one problem. The Dalmatians’ white coats made them easy targets for enemy guns. The British coloured the dogs brown so they could not be seen easily.


06  Where do Dalmatians originate from?
The Dalmatian is actually an ancient breed and its true origins are not known. Spotted dogs with similar characterists to the modern Dalmatian have appeared on Greek and Egyptian wall murals dating back to 2000BCE. Even back then, the murals show them next to the chariots of ancient Greece, Rome and Egypt, indicating that the Dalmatian was specifically bred as a carriage dog.

While it appears that the name "Dalmatian" originates from a little known region in Croatia called Dalmatia, there is little evidence to support the theory that they originated from there. Most likely the dog was first described by someone visiting the region and the name stuck.

In 18th century Britain, the Dalmatian became very popular with the aristocracy as an addition to their ornate carriages, especially because of their ability to work alongside and in front of the horses or under the carriage axles. Additionally, their distinctively unique spotted coats were seen as attractive. They were given names such as ‘Spotted Dick’, ‘English Coach Dog’ and ‘Plum Pudding Dog’.

Wherever they originated from, the Dalmatian continues to be a very popular breed all around the world.